“The Naming of Cats is a difficult matter,
It isn’t just one of your holiday games;
You may think at first I’m as mad as a hatter
When I tell you, a cat must have THREE DIFFERENT NAMES.” –T.S. Eliot, The Naming of Cats

The word “Namaste” is often used in yoga classes to mean “hello” or “good bye,” not unlike the Hawaiian “aloha.” But like “aloha” it has deeper meaning. Yogis and yoginis sometimes give the more spiritual translation “the divine in me honors the divine in you”- and while closer to the truth, this also doesn’t get at its deeper signification.

“Namaste” is actually two words: “namaḥ” and “te” which literally mean “salutation to you”. Put another way, it can also mean “I invoke your true name” because our English word “name” comes from the Sanskrit root “nam” which means to salute or honor. Thus, to say “namaste” is to invoke a person’s deep, spiritual name, a reflection of who they really are.

What’s in a Name?

En arche ein ho logos- “In the beginning was the Word”- this well known phrase from the bible reflects what Vedic philosophy expounded thousands of years before it: that sound and vibration are the cause and substance of the universe.. The seers of ancient India told us that the universe hums to the tune of OM and that everything in it vibrates at its own characteristic frequency. Being microcosms, human beings too have unique sounds that resonate with who they are, and in ancient days these were made part of their names.

The mantra any person hears most in their life is their name. Doesn’t it make sense that the sound of yours should reflect your best qualities, rather than repress them? India’s sages thought so, and took naming seriously. They found the syllables with the optimum mantric value, using the birth horoscope and other sources, and assigned them to the newborn to give it the best possible start in life.

Like T.S.Eliot’s cats, we too have different names- which as we go through life, or enter a spiritual path, often change to reflect our evolution. The name we’re given at birth is the most basic, reflecting our parents’ consciousness. Later, our friends give us nicknames which often are more personal. But there is a deeper name that is our true, spiritual mantra, and it can be read in your Vedic horoscope. What’s more, you can be assigned a different name depending on your goals in life. Want to make money? Pick the sound of a planetary position that represents wealth in your chart. Want peace and love? You can find the sounds that invoke these too. In fact, Sanskrit is structured in such a way as to represent sounds based on their unique qualities.

For example, gutturals (uh,aah,ka, kha, ga, gha, nga and ha) have a harsh, warrior-like sound, and relate to the planet Mars. Languages like Arabic that emphasize these often engender a stronger Martian consciousness in their speakers. The name Genghis Khan (or Adolf Hitler) doesn’t exactly invoke romance, does it?

On the other hand, the palatals (e, ee, cha, chha, ja, jha, ña, ya, and sha) are soft and Venusian. The Italian language is full of these, (Ci vediamo, Giovanni!) which may be one reason Italians are viewed as lovers, artists and hedonists, rather than fearsome conquerors.

In this way, every sound was assigned a value by the seers who organized the Sanskrit language. Some modern masters even use the alphabet to help diagnose medical problems through the lens of Ayurveda. Mispronouncing the sound “Cha”? There may be kidney problems, or dehydration. The reason? The phoneme “Cha” relates to Venus, the Water Element and the Kidneys. It may seem like magic, but it isn’t once you know how it’s done. Though like any skill it takes time and practice to learn.

So what does this have to do with “Namaste”? When you say this to anyone, you are invoking their real name- their “ineffable effable Effanineffable/ Deep and inscrutable singular Name,” as per T.S. Eliot. And by doing so you allow and encourage them to be their most authentic selves. Today there is talk about minimizing our carbon footprint, but the seers of India believed we should minimize our ‘karmic footprint’- because creating undesirable karma harms both ourselves and the world. To do this, we have to be true to ourselves- to live our dharma and vibrate at a level that resonates with our purpose on this planet. When we do not, we unconsciously send out ‘bad vibrations’, which is ultimately unsustainable for us or for our environment. Real ecological, financial, and spiritual sustainability starts from here, from knowing your dharma, and your deep and inscrutable, personal name.

To invoke someone’s true name means to go beyond the surface level of everyday speech and speak to a person’s essence.

The first level of speech is called vaikharī, ordinary, superficial speech. It is said to originate from the mouth, and is the most subject to modification and change (vikāra) because there is no real substance behind it. Imagine three people on New Year’s Eve. Person one with vaikharī vak says, “I want to lose 10 lbs. next year” This is the person who by the following morning will have forgot their resolution.

The next level of speech is called “madhyamā”- and it comes from the throat center. It is speech stimulated by thoughts and ideas, and as a result has a deeper effect on us. The person making a vow using madhyamā vāk has thought through what they want to do, and will likely follow it for a few weeks before becoming distracted.

Finally at the third level we have “pashyantī vāk”. Pashyantī means “seeing”, and it is the deepest speech available to most of us. It comes from the heart center, where the mind and emotions reside according to Vedic philosophy It is from here that men and women of vision operate. It is from here that Dr.Martin Luther King declaimed, ”I have seen the Promised Land!” and on the other end of the spectrum, that Adolf Hitler inflamed and galvanized a nation.

People who speak with this level of vision are passionate and convicted- so much so that obstacles do not faze them. Anyone making a vow from pashyantī vak has already envisioned the final result so clearly that the actual follow through is just details- the outcome is already a foregone conclusion in their mind’s eye. This person not only loses the ten pounds, they inspire others to do so too.

There is a fourth level of speech, called parā vāk, which is available during meditative states, and is the level at which grace speaks to and through you. It is difficult to maintain for all but the most saintly among us.

So what does this have to do with names? Part of finding your dharma is to find your secret word and name, a technique I detail in my Decoding Your Dharma seminars and my second book, Sex,Love & Dharma. For example, Sherri is a fine name, but there are many Sherris in the world; it is not descriptive enough. Sherri the Wise may be a better option for a teacher, or Sherry Goodheart, for a particularly generous person. Sound medieval? Perhaps, but it is also a fabulous way to examine and sometimes even redefine yourself. When in doubt, remember that friends or mentors can also help you find your descriptor, because those we are close to often see us better than we see ourselves.

How about some famous examples? Marshall Mathers is perfectly normal, but Slim Shady speaks to a deeper level of Eminem’s alternate personality. Caroline is fine, but Sweet Caroline is more memorable. Bill is good, but William the Conqueror evokes the powerful persona of this famous character.

Another way to find your name is to link it to your totem animal. This Native American practice entails meditating on a creature from the animal kingdom that resonates with you physically, mentally, and spiritually. Your totem or power animal can help you find your place in the world, even the right diet and exercise program. For example, one client in a seminar connected to Bear energy. When I asked him what he ate, he retorted, “pretty much anything… though I particularly love fish”. Thinking quickly I asked, “But you must also have a sweet tooth, right?”

“Yeah, he replied, but I always feel bad after gorging on sweets and chocolate.”

At that moment the light bulb went off for him- his Bear totem not only described his personality and physical abilities, but also his diet and lifestyle- and what he needed to avoid.

Another client related: “I don’t know what kind, but I’m definitely some sort of small bird.”

When we analyzed her diet, she explained that, much like the totem she connected to, she loved nuts and seeds, preferring to snack a little all day over gorging on just one meal. In addition, her frame was slight, and she preferred jumping and aerobic-style exercises.

The etymology of your name can also prove insightful. Petros (Peter) means “rock”. And when Jesus exclaimed “I will build my church on this rock (petros) he was making a pun on Peter’s name. If, as described above, that first sound (“Peh”) also happens to resonate with the power syllable of your birth horoscope, sometimes called your “primordial sound,” then it becomes an even more personal mantra.

To find your personal sound, contact Simon at siddhadeva@yahoo.com.

Thus, next time you say “Namaste” remember that you are invoking the heart and soul of a person, their original name. 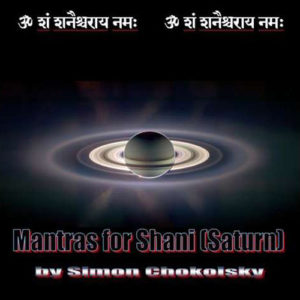