What Shapes Say About Your Face & Home

Did you know that just by looking at someone’s face, you can tell whether they are travel-oriented or the stay-at-home kind. You can see if they are good with money or hopeless spenders; even whether they are romantic and sentimental or practical and unsentimental. Faces can show if a person is an early- or late-bloomer, people-oriented or introverted…and more. That is because, though the eyes are windows to the soul, the face is the mirror of the personality.

It is not by accident that Disney draws square-faced characters when they want to represent stability and hard work. Nor is it random chance that the people-oriented, always-on-the-go characters have round faces. Or that introverted types wear thin, longish visages, while the heroes boast square jaws and giant chins. This is because the science of Vāstu applies not only to houses and lots, but to deciphering human beings as well, where it is called Sāmudrika shāstra. Sāmudrika shāstra includes palmistry as well as face, head and body reading 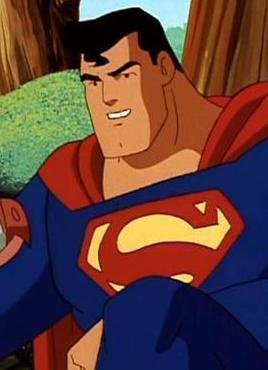 When Vālmīki, author of the Rāmāyana, describes his main character Rāma as having knee-length arms (ājānu bāhu), huge chin (mahā hanu), and a collarbone covered with flesh (gūdha jatru), these are not just aesthetic observations, but insights into his character as well.** For example, long arms connote diplomacy and someone who is slow to anger. Short arms, by contrast, give the opposite tendency. (Think Homer Simpson or the Tyrannosaurus Rex). A strong chin indicates heroic ability; the power to lead and to do battle. In fact, Rāma’s main accomplice in the Rāmāyana epic is Hanumān, whose name literally translates to “he who has much chin”. 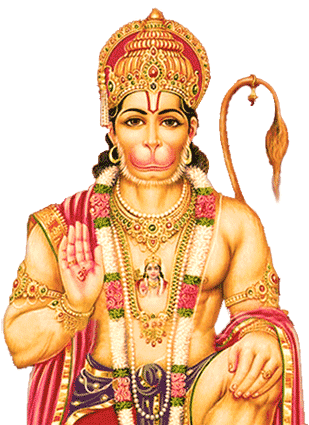 The next descriptor is puzzling at first — neck and collarbone hidden by flesh. What insight does this provide? Consider that vāta-predominant folks tend to have Air and Spaceelements prevailing in their bodies. They may have sunken cheeks and a stark, visible collarbone and shoulder blades. The primary vāta emotion is anxiety, fear, and changeability. By noting that Rāma has none of these features, the author signals us listeners (and readers) that Rāma is stable, fearless, and probably kapha-predominant, which he confirms later by calling him snigdha varna, of unctuous appearance.

You would miss these clues if you didn’t grok the common thread that links most Vedic traditions: the 5 elements. This understanding informs the various sciences Āyurveda, Vāstu, Sāmudrika, Jyotisha, and others. Let’s take a look at how to interpret the five elements throughout these sciences.

Earth, square. In vāstu, this is the most stable shape for a house or lot. It confers security and permanence. In face reading, it indicates a hard-working, loyal person whose main interest is security and practicality.*** In hand analysis (hasta sāmudrika shāstra), squares indicate protection or institutionalization; being fenced in by a secure environment such as college… or prison.

Water, circle/oval/curvilinear shapes. In vāstu, circular shapes are good for public buildings such as state capitols, stadiums, and meeting halls. They are not advised for long-term habitation since this shape, like the water element itself, connotes flow with the changeable rhythms of nature. Therefore, unless you’re a nomad living in a hunter-gatherer tribe, yurts and teepees are out if you want to invite any kind of stability into your life.

In face reading, circular faces (like a baby’s) indicate someone with public appeal, who is easy going, and has a deep love of food. Such people do great in sales. Think Emeril Lagasse. Oval faces, which are the most common, ‘average’  shape, are agreeable, nurturing, and good mediators 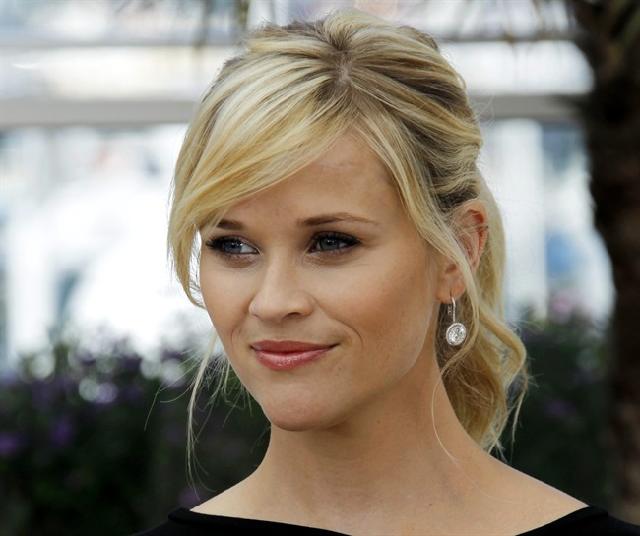 Fire, triangle. Downward-facing triangles indicate grace coming down; upward facing indicate aspiration flowing up. People with triangle-shaped faces (like Reese Witherspoon) are fiery, inspired, quick thinkers and probably fast drivers. In Āyurveda, this indicates a pitta-predominant person. If they also have a triangle-tipped tongue then they will be good orators and writers. A person with a triangle-shaped face may also consider themselves a visionary or prophet. Be careful of this type, especially if the face is also narrow, and thus less stable.

A triangle pointing upwards indicates high aspiration. Pyramids were built to transport the souls of the dead to heaven as were gothic churches. People with this type of face, which is pear-shaped, can be moody when stressed and have big aspirations. In hand analysis, triangles can indicate success and brilliance when well-placed on the palm. 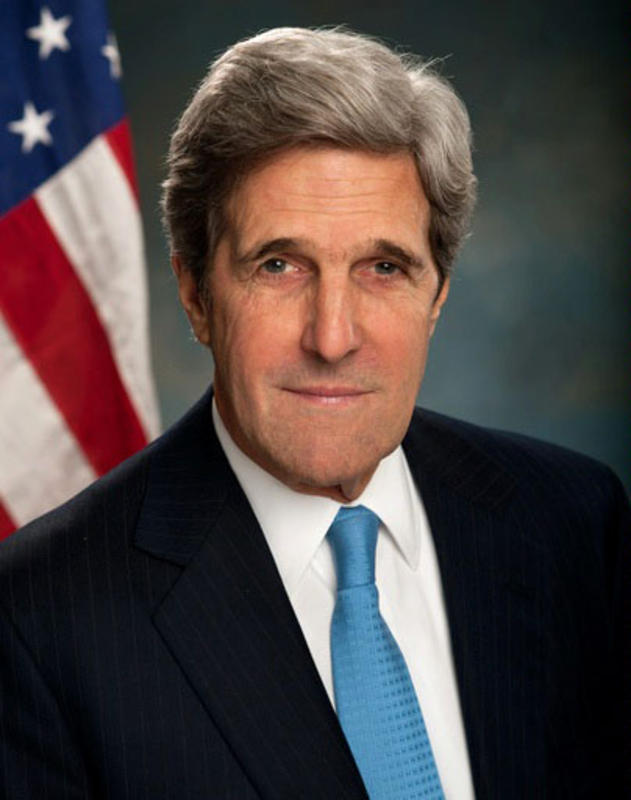 Air, rectangle. In Vāstu, the square is the ideal shape for lots and dwellings. This square can be extended into a rectangle provided it is not stretched to a 2:5 or less ratio, in which case it becomes unstable. The Air element connotes movement. A stretched rectangle (2:5 ratio and less) becomes a hallway or a highway, places where people or vehicles travel. People with rectangular faces (like John Kerry) are scholarly, have learned confidence, and are step-by-step oriented.

Space, diamond. The diamond is a square turned 45° on its side. Lots or houses that are rotated 45° to true north face problems. That’s right, it’s not enough to have a square-shaped house, it must also be aligned to true north (and, hence, the other three cardinal directions). If, instead, the square is tilted to where you have a diamond shape, this invites problems in the way of litigation, enmity with neighbors, and feeling like an outsider. In face reading, a diamond-shaped face (like Lou Diamond Philips) connotes strong independence, a survivor instinct, and a need to travel.

Shapes and the elements they correspond to are the first step in palm or face reading. The next step is learning to identify specific markings (lakshana), which we’ll do next time. Long teeth and earlobes, for example, can indicate longevity, whereas a square chin and a large nose may signal financial success. Putting these together in a comprehensive way that also includes Āyurveda, Jyotisha, Vāstu, and Sāmudrika shāstra will give you real and deep insight into your clients, friends, family, and best of all… yourself! 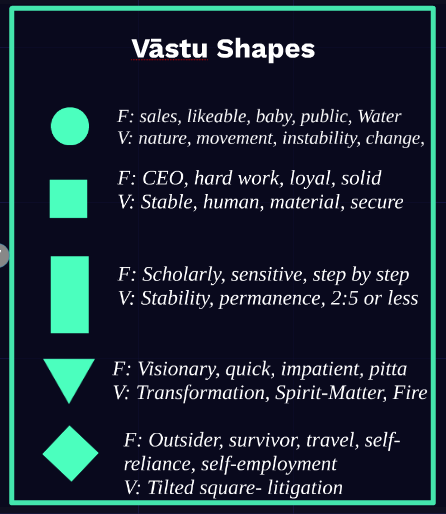 note: in the illustration on the left,

V = Vastu, or the shape of your home or lot.

*** The first chakra’s shape is a square. 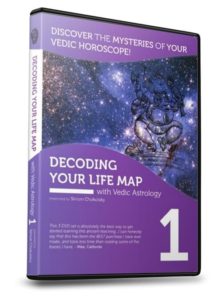 This excellent book offers a systematic and well-organized view of five types of human personality. Very well written and easily understandable, it provides a detailed knowledge about each Dharma type. All the concepts and practices are built into a framework that thoroughly explains how to discover and then live each particular Dharma type.